There's a picture making its way around Facebook. And I don't care for it. Here it is: 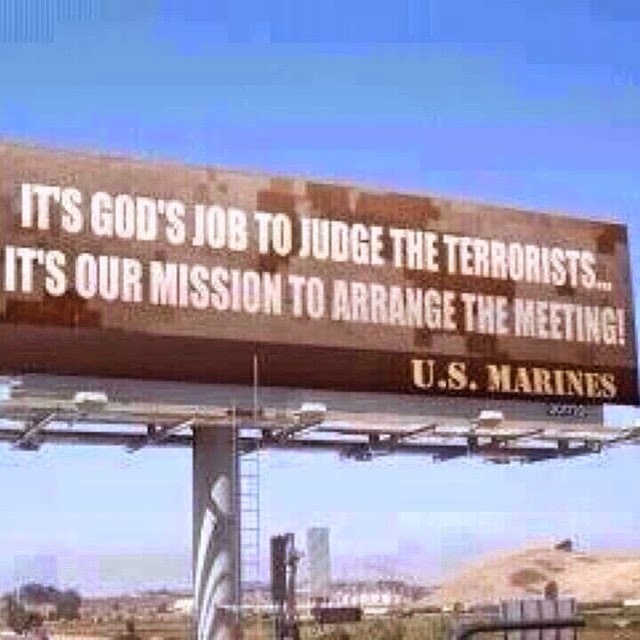 First, I'm ashamed of the fact that I know, personally, people who reposted this on their walls. Secondly, you have GOT to be kidding me.

I put this right in the propaganda category. I am ashamed of those who put signs like this up in an effort to mislead ignorant people and justify/glorify killing. I am NOT a fan of violence. I am opposed to it.

In my mind, this sign isn't supportive of American troops. It's supportive of killing. Plain and simple. It signifies that killing is something we should be proud of doing. It glorifies killing. It truly sickens me. Killing, for what ever reason, is not fun or funny or something of which we should be proud. That's the mentality of ignorance and fear and stupidity, the KKK and the like.

Although not written as an anti-war song, though, in a way, the inspiration was a type of war, I think of this song:


And I'm pretty sure this one needs to be heard everywhere:


It just may be time to get out those old LPs that you have in the attic, or that your parents or whomever have up there, and listen. Things are getting out of hand. And, contrary to the belief of those posting that sign, we are NOT better than everyone else on the planet.

Does killing in vengeance bring back those whom you are avenging? No. It does not. It doesn't change a thing other than someone else is now dead. The difference is that now, you are the murderer.

If you take this to mean I am down on the troops, you misunderstand. I'm not. I have relatives in the military- past and present. And I know how they feel about killing. In all honesty, I have never, NEVER, met a single military person who was involved in a war who told me how wonderful it was or how much they enjoyed killing another human being. I also have never met someone in the military who didn't come back changed after a war. War sucks.

Email ThisBlogThis!Share to TwitterShare to FacebookShare to Pinterest
Labels: Flag decal, For What It's Worth, glorifying violence, John Prine, opinion, war