There's Chocolate Cake in the Fridge

When there's chocolate cake in the house, does it matter who bought it or that it isn't for you? No. It does not matter one little bit. If you bring cake into this house, you have brought it in at the risk of not having it there when you return. If the cake exists, it is quite safe to assume that, even if you put your name on it, someone else is going to eat that cake. It doesn't even matter if it is your birthday cake. It  will be eaten.

There is a woman living here. A woman of a certain age who adores chocolate more than just about anything else there is on the earth to adore. And, when you put that chocolate into cake form, well, it's doomed from the git-go. There is no such thing as a chocolate cake repellent nor is there such a thing as willpower when it comes to chocolate cake.  Especially when there's a man living in the same house who has, in his aging years, become worse than he already was in the areas of manipulation, meanness, forgetfulness and grossness. I kid you not.

And then there's the daughter who moved back home for 'just one year,' 15 months ago.
It's not that I mind one of the kids moving back into the house. But did it have to be one of the messiest ones? Was it not bad enough that I have Fred Sanford living here already?

My side yard looks like a salvage yard. I can understand some people who collect junk. I really can. Because they re-purpose the junk. The stuff that sits in my yard and the storage tent in the back yard does just that, sits. For years. Decades. I've gotten Fred confine to what was once the garage. It was turned into a playroom when the girls were growing up to give them more room for play and socializing. That area looks worse than the outside. I would take a picture but, some of it, is actually embarrassing. I don't even want to admit that I know someone who does some of the things Fred does. Dis. Gust. Ing. Fred has lost every single key to my car except one. He has lost his cell phones and four house keys. The list goes on but I believe y'all get the point.

And then there's the room where the daughter who moved back in resides. I had just gotten that room turned into a guest room. It was so pretty. See? 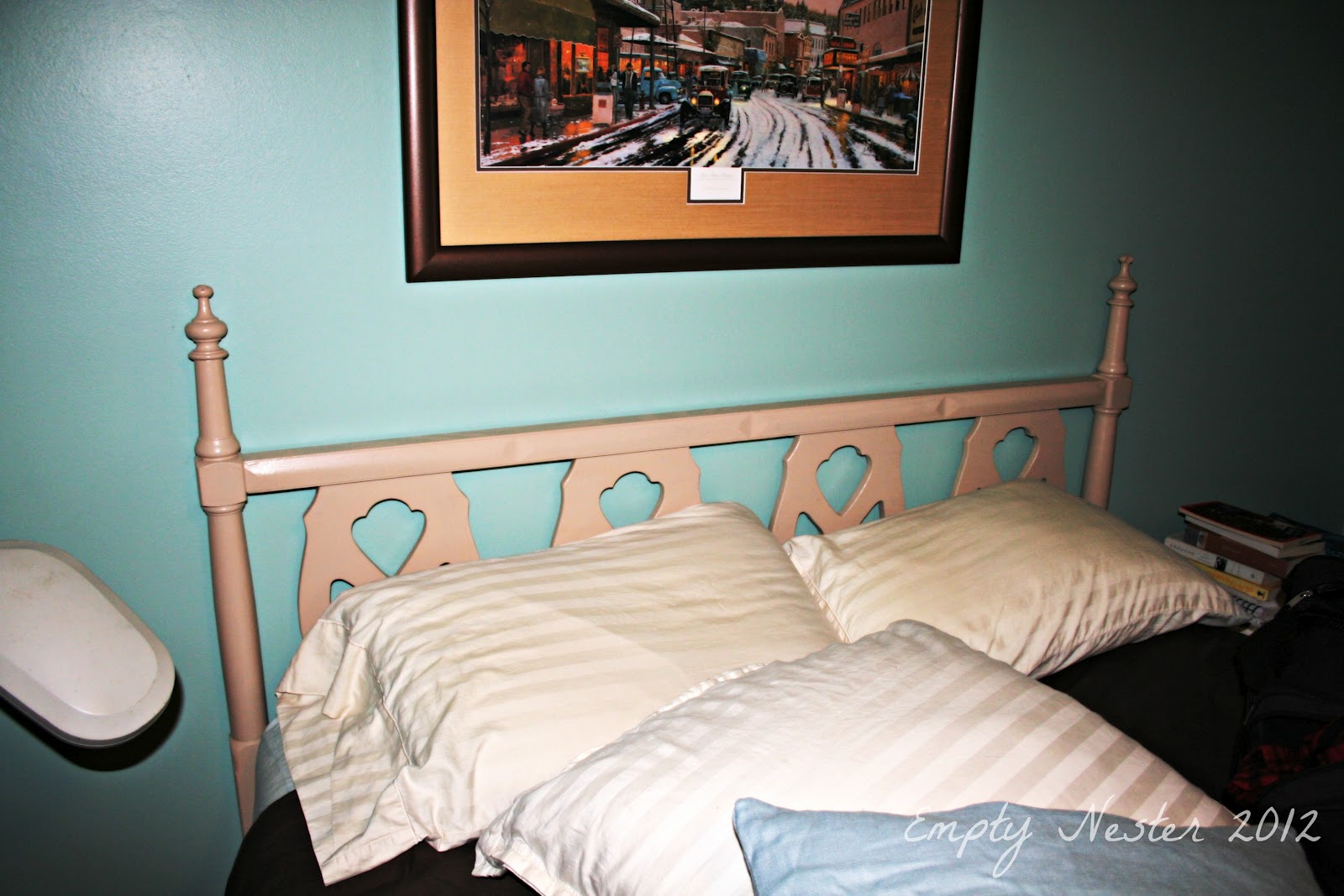 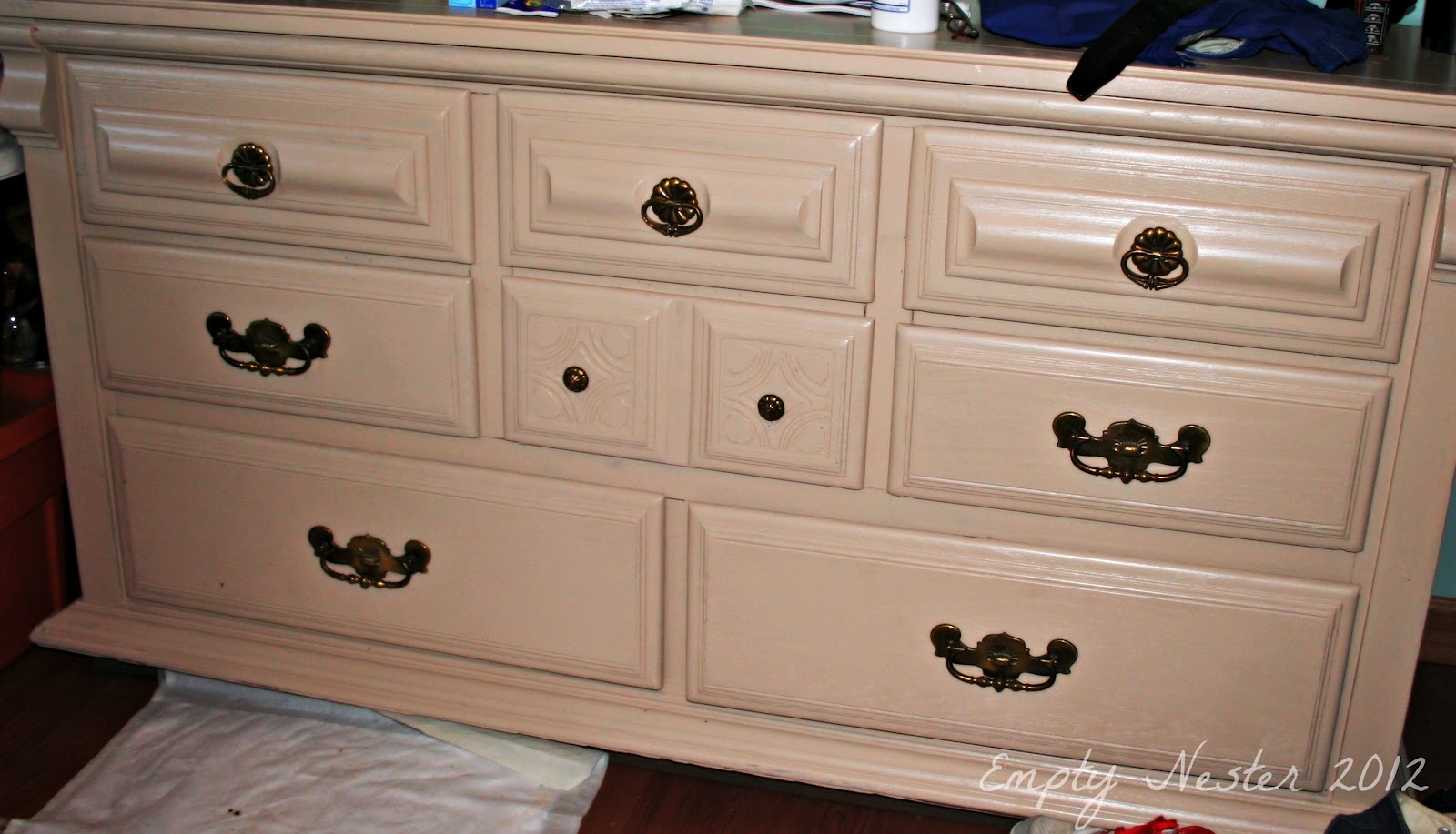 But no more.  Everything she owns is strewn all over the floor and walls and ceiling. The drawers (of the furniture I painted) are all hanging open and, from the places she puts her takeout food and drinks, let's just say I'll be repainting that furniture when...IF...she moves back out. Trash gets emptied once every couple of months and I have only been able to get in there to vacuum the rug and steam the floor twice since she's been here. She's supposed to keep it neat, tidy, clean in there in lieu of paying rent. Right.
I'm not saying that I'm the neatest person in the world. But I do put things in their places. Nothing of mine is strewn about haphazardly. And nasty? No. I don't leave food out and I don't drop food on the floor while I'm eating. I wash up after myself (and everyone else, I guess that's my job) and my room is tidy. And I don't use empty water jugs for anything other than recycling and mixing up food for my flower garden.
It is quite difficult for someone who appreciates neat/tidy/clean to live with two adults who wouldn't recognize order and clean if they saw it (I know this because they see it every day when they walk through the front door.)

So, yeah. If someone brings chocolate cake in the house- for whatever reason, it's going to be eaten. And then the fork and plate are going to be washed and put away. And I dare anyone to try and stop me. On BOTH counts.


Not that I'm going to always post recipes but this just sort of happened. Again. Ha!

My grandmother didn't have a chocolate cake that I recall. Though I do recall her pineapple and her coconut cakes, vividly. But, when I was a teenager, she started making this coco cola cake and it was scrumptious! Healthy? Nope. But scrumptious! :)

Have you ever noticed how venting is just as good as eating chocolate cake? Me neither.

The Truth About Grits

They're not just for breakfast. Especially if you live here in the low-country of SC like I do. Once upon a very long time ago, I didn't live in this area. I was from the upstate. And I had NEVER heard of such a thing as shrimp and grits. Shrimp and Grits. WTH?

During my thirty years here in the Charleston area, I have not only come to know and love shrimp and grits, I've learned who has the best and who should simply stop trying because it's just not working for them. I've also developed my own recipe from the trial and error of trying out the recipes of other folks- local and not so local.

I've been told that my shrimp and grits recipe is better than any other anywhere. Of course, that compliment hails from my family so I'm not sure it really counts. However, if y'all come down this way, give me a shout and I'll cook some up for you and you can judge for yourselves!

Grits can refer to other things besides food. For example, if you possess grit, you have courage or strength of character. That you are confident. You have the 'stuff'. You can grit your teeth when you are angry or maybe even when you are worried or scared. And I'm sure y'all have seen those tee-shirts: G.R.I.T.S which stands for Girls Raised In The South.

Grits can also mean that maybe you possess a bit of fire. That you are opinionated. That you are outspoken. These are the type of grits some of us possess that most other southern gals do not. This is where the line is drawn in the sand between those living that whole 'southern charm' philosophy and those of us who think that's a bunch of bunk. Therein lies the type of grit I possess. And I come from a long line of women who possess this type of grit. My mother might have even been donned with the nickname, 'Grit', in her younger years.

Oh, don't get me wrong. I can muster up some southern charm. But mine is way more related to sarcasm than actual charm. Because southern charm is all about turning a blind eye and deaf ear to the reality of any and all situations.

There are many, many things weighing on my mind. Some of them have been waiting in reserve for YEARS and others are relatively new. Regardless, they need a platform and GRINDING MY GRITS is going to be that platform. It's not meant to be a negative outlet for bringing anyone or anything down. My hope is that those who stop by will join in and discuss their own opinions and that others will find their own voice. I also hope that readers will realize that venting is healthy and that there is humor to be found in so very many life situations. Maybe we'll even learn some things about topics we didn't know before. Mostly my hope is that all will enjoy a good laugh.

Empty Nest is still up and running and I'd love to see y'all still stopping by there as well!

In case anyone is interested, here's my Grits recipe. In the true southern manner, I won't share the shrimp part. Because, here in the south, we don't share recipes that we don't want reproduced. Not to mention the fact that I cook like my grandmother did--we might start with a recipe but, when we perfect it as our own, it only resembles the original. Cooks like this can't tell y'all our personal way because we never write that kind of stuff down.

A word about these grits: this is the recipe with which I started. I do my own thing now after a few times of making them to the recipe. I will say that the key to good, creamy (instead of gritty) grits is TIME and low heat.

In a large, heavy saucepan bring the water to a boil. Add a generous teaspoon of salt and the grits and stir with a wooden spoon to combine. When grits thicken, add milk, cream and butter and return to boil. Reduce heat to a simmer, cover sauce pan and cook for 45 minutes to one hour (I cook mine longer) until grits are tender, smooth and creamy. Taste and season with salt and pepper. Keep covered and warm until ready to serve.

Welcome to 'Grinding My Grits'!

I'm under construction here for a bit longer. Hang in there! I'll be up and running soon with plenty of opinions, advice and laughter. I hope you find this a great place to vent, share and laugh with me!
Posted by Empty Nester at 6:43 PM No comments: